With its displays of Fenland farming equipment and rural crafts, the Farmland Museum is the perfect place to explore both the art and the function of the eel trap. 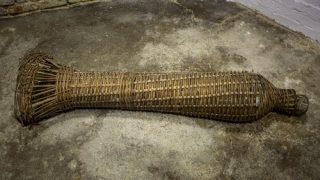 Eel traps were used in Britain from at least the eleventh century. They were once a common sight across the Fens where eels were in plentiful supply. Known as the ‘capital of the Fens’, Ely’s name is said to mean ‘island of eels’. They were a valuable commodity, the monks at Ely are reported to have exchanged eels for the stone to build the cathedral. Eels could be used to fertilise the fields and were said to cure ailments from deafness to keeping you young. They were also a staple food from the Middle Ages until the 1940s. Not only were eels plentiful and popular, they were relatively easy to catch once you had the knowledge and the correct tools. 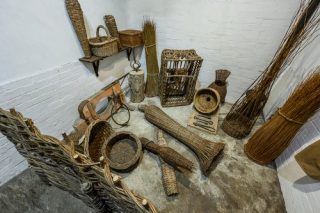 Eel traps in the basketmaker’s display at the Farmland Museum

Making an eel trap was a skill passed down through generations.1 The exact design varied between makers and regions, but the broad principles remained the same. In Cambridgeshire, eel traps were frequently made from willow – a light and flexible wood that can tolerate being immersed in water. First, the willow was cut while still young and green when it was at its most supple. Traditionally branches were split along the grain using a wooden instrument called a clove, although today makers use whole branches for a more finished appearance.2 Next, the wood was softened by bending it backwards and forwards. The willow was then ready to be woven into two interlocking baskets. 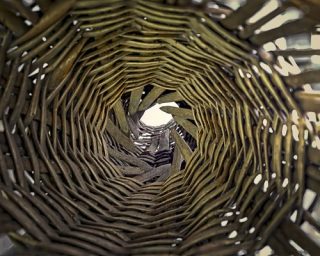 View of the interior ‘spikes’ of the eel trap

The traps would be baited with gudgeons or fish gut and weighted down with stones at either end before being left in a river overnight to catch the unwary eels as they swam upstream. The eel would swim into the long neck of the trap before being funnelled into a second internal cone-shaped basket. Sprung, inward facing sharp twigs would expand just enough to allow the eel to enter the trap but made it difficult for the eel to escape. Once the stopper at the opposite end was taken off, the eel could be removed by the fisherman. Stopper to prevent the eels swimming out

The design of the eel trap was so successful that it barely changed over time. Today the Common European eel is a critically endangered species, and the traps cannot be used for fishing.