The role of the wheelwright was vital to village life. Before the pneumatic tyres and mass-produced transport which we have today, people relied on wooden horse-drawn vehicles and equipment for both work and leisure. 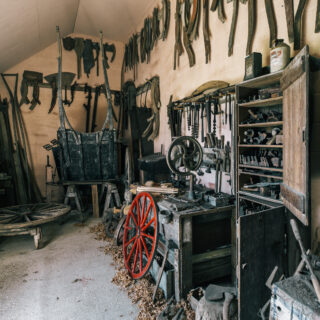 The Wheelwright Display at the Farmland Museum

Our wheelwright and carpenter’s display includes items from James Watts & Sons, a former wheelwright’s workshop in the nearby village of Stow-cum-Quy.1 The Watts family had been wheelwrights for generations, passing on the acquired knowledge of their craft from father to son. 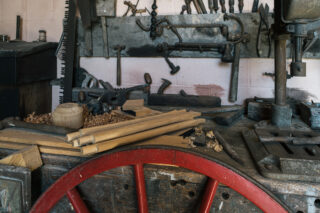 The village wheelwright was responsible for making and repairing wooden wheels. Frequently they were also expected to turn their hand to anything that involved wood. In addition to crafting wheels, James Watts & Sons also produced coffins, repaired buildings, and painted houses. Our display highlights both the more familiar carpentry and painting equipment as well as the more specific implements of the wheelwright which were used to fulfil this varied and highly skilled role.

The wheel would start with a cylindrical central hub (pictured). This would be carefully marked up to indicate where the holes were to be bored which allowed the spokes to be fitted. The spokes would be driven into place with a sledgehammer and the felloes (rim) of the wheel were hammered into place in sections. 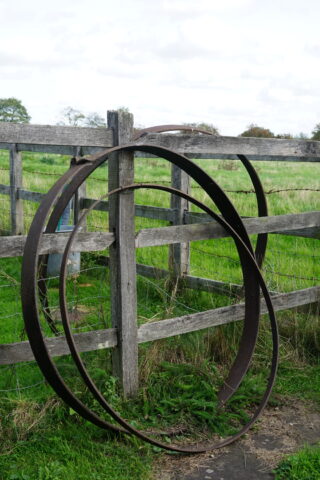 The large hoops lying against the fence outside are steel tyres (pictured). They were fitted onto the outside of the wheel by heating them until they expanded. Then, the wheel would have been cooled with water which shrunk the tyre in place. The tyres would have given the wheel strength and protected it from the ground surface.

Finally, the wheel needed to be boxed. This meant that the central hub had to be hollowed out and a box inserted and fixed with wedges. The axle arm was then fitted into the box.

One particularly colourful exhibit is a set of drawers containing pigments. These were ground up and mixed with oils to produce paints. On display is also a grinding stone and a paint mill. These paints could be used for decorating houses as well as carts and wagons. 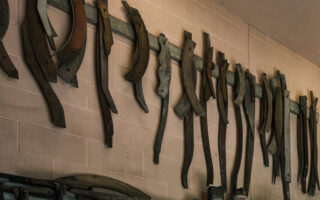 The display also includes patterns for making wooden items. Many are marked up to reflect their use: ‘a brace for shafts, 1903’, ‘handcart’, and ‘18” long 6” wide’. Patterns provided a template when shaping the wood and saved the wheelwright time when producing commonly requested items.

In The Wheelwright’s Shop, George Sturt records his craft in the early twentieth century.2 Sturt describes how a wheel is made and the many skills which this required including selecting the correct tree, seasoning the timber, and tapering the spokes. Crafting a wheel required a combination of hand-eye skill, artistry, and tacit knowledge (gained through experience and a feeling for the work). Apprenticeships typically lasted for seven years. Sturt recounts his grandfather saying that nobody could learn to make a wheel without first chopping his knee half a dozen times!

1 Many of the items in the wheelwright and the carpenter’s display were generously donated by the family of Museum Trustee Vice-Chair Caroline Hunt after the shop closed in the 1990s. Wheelwright Way in Stwo-cum-Quy marks the importance of the old workshop within the village.