Step Back in Time

Experience how people used to shop in the early–mid twentieth century with the Farmland Museum’s recreation of a village shop. 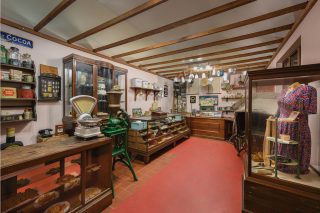 SOUND. Serving the local community, the shopkeeper would have known their customers and might have welcomed you by name. At busy times, with a queue of people waiting to be served, you could sit down and catch up on the local news with your neighbours. In the background there might have been the sounds of the coffee grinder or the clink of coins as people paid for their goods. It wouldn’t be surprising to hear the excited voices of children as they pleaded for the sweets, toys, and games on display.

TOUCH. Shopping was not self-service. Most items were stored behind the counter and needed to be requested. The shopkeeper’s role was a hands-on one as they would fetch, measure, and weigh your items. Fresh produce would be served to you wrapped in paper by the shopkeeper’s hands. Without a car, shoppers bought only what they could carry and visited the shop frequently. Often goods were transported home in a wicker basket which was probably made locally by a craftsperson. 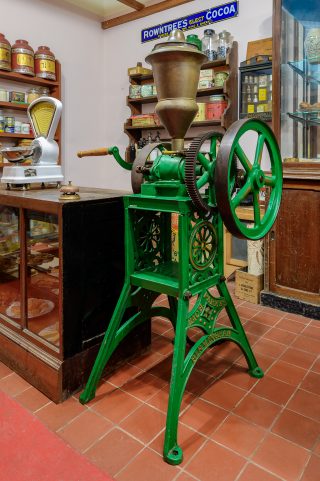 SMELL. In the early twentieth century most of the goods would have been sold loose. Shoppers could have smelled the different goods on offer including meat, butter, tea, ground coffee and baked goods. These aromas would have mingled with the earthiness of unwashed vegetables straight from the fields. 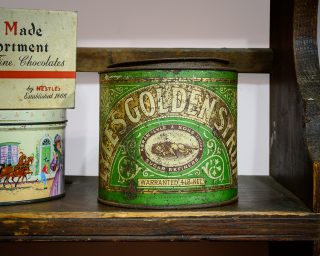 SIGHT. Some goods were sold pre-packaged with attractive designs to catch the shopper’s eye. Many of the items in our shop are still recognisable today. For example, Lyle’s golden syrup has used the same green and gold branding since 1883 (pictured). Whilst other products are now less familiar. For example, Zebo wax-based polish for polishing cast iron stoves and fireplaces (pictured). 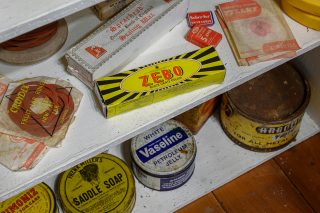 TASTE. Typically, village shops would have stocked both local and, increasingly, imported goods. Our shop includes regionally produced items such as Colman’s mustard. Its distinctive yellow packaging, still in use today, has the logo ‘Colman’s of Norwich’ (pictured). Village shops also allowed access to a wider range of tastes and sold imported goods including tea, coffee, currants, and tobacco. 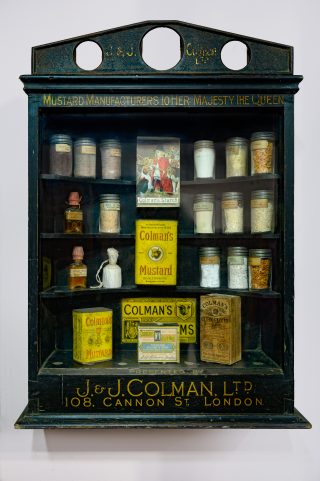 By supplying such a wide range of products, and our shop includes a haberdashery and a stationary section, shopkeepers ensured that customers could find everything to meet their day to day needs and offered some luxuries. Village shops were at the heart of local social and economic life and would have provided a personal and sensory experience to all customers.