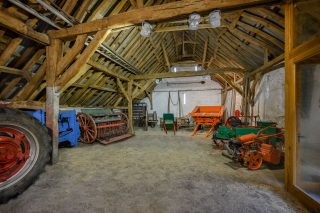 Interior of the seventeenth-century stone barn at the museum

Look up inside the stone barn to explore its early modern construction techniques. 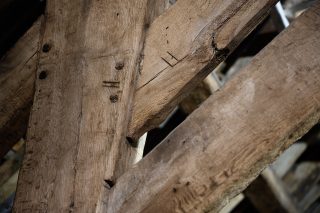 The series of Roman numerals (I’s, V’s, &, X’s) incised into the wooden timbers are carpenters’ assembly marks. These are the marks made during the construction process of a timber building.

The carpenter would begin by building the timber frame on the floor often in their own yard. The timber would be laid out and joints cut into the beams to allow the pieces to fit together like a large jigsaw puzzle. The carpenter would then mark the timbers to identify the pieces of the frame. It could then be taken apart, transported to the site, and hoisted into position. The carpenters’ marks ensured that it could be reassembled quickly and correctly. The numerals identified which piece belonged in which position.

This construction technique was used throughout the medieval and early modern periods. Nearby, the wooden roof in King’s College Chapel, Cambridge University has Arabic (1,2,3 etc) markings. However, Roman numerals, as seen in the stone barn at the museum, are the most commonly known assembly marks.

The marks could be formed using a pointed tool, a chisel, or a knife. A wood saw was sometimes used too, these marks run right across the width of the timber.

Assembly markings often follow a numerical sequence. Working from the lower numbers towards the higher ones we can understand which end of a structure was built first. The marks can also shed light on the history of a building. If the markings are not in sequence, this suggests that the building has been altered, re-ordered, or repaired.

Carpenters used different marks to denote the right- and left-hand sides of the building and which way up a timber should be placed. Arrows can be seen inscribed into the roof timbers of some buildings.

The main timbers in the stone barn are oak. This hardwood was favoured by builders because of its strength and resistance. Oak is a timber rich in tannic acid which attacks any metal it may come into contact with. This means that over time the acid would corrode iron nails, and, in turn, the metal would leave a bluish-black stain on the wood. For these reasons, the roof timbers are secured by wooden pegs, known as treenails or trunnels. 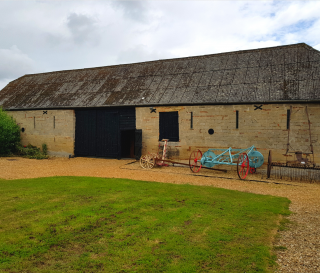 The barn was a high-end addition to the buildings at Denny farm. The walls are made using stone from the abbey remains on site. Once complete, the stone barn provided a dry covered space for storing crops and grain and a central threshing floor. Today it is a Grade II listed building. Following careful restoration, it now houses a display on different aspects of farming such as root crops, cereals and fruit growing.