Think that doing your washing is a chore? Have a look at how the residents of Walnut Tree Cottage, in the grounds of Denny Abbey, would have cleaned their laundry in the early twentieth century. 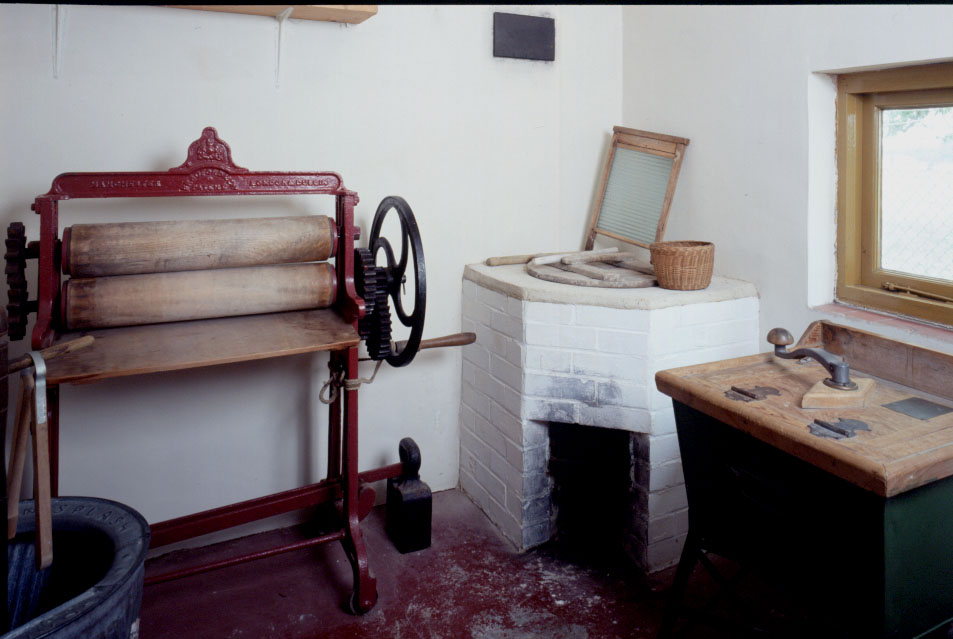 Washdays would start with lighting the ‘copper’ heater for the hot water.1 Our farmworker family were lucky because they had an indoor cold water tap in their wash room. Other families would have to fetch up water with buckets from a nearby well or water source. Once the water was hot, a bucket or a ladle was used to transfer it to the wash tub along with soap and the dirty laundry. 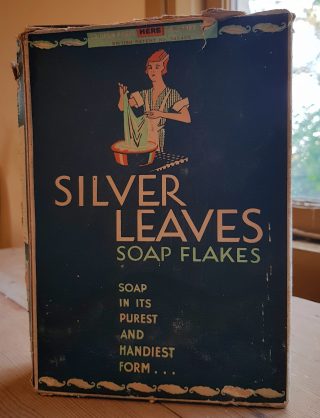 Soap could be made at home from animal fat and lye but this was caustic if it came into direct contact with the skin. The earliest commercial washing soaps came in the form of blocks which could be rubbed directly onto any laundry stains and grated for use in the tub. By the 1940s boxes of soap flakes had become available, like the ‘Silver Leaves’ brand. 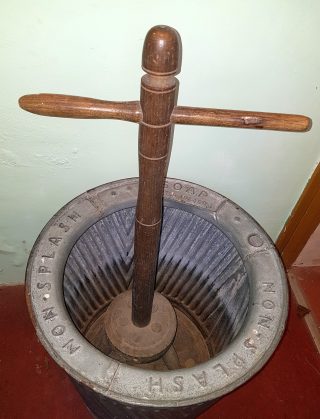 The wooden dolly resembles a milking stool with legs on the bottom and a central pole with two horizontal arms. This was plunged up and down and twisted from side to side in the tub. The legs would take hold of the laundry and move it around in the hot soapy water. This would take a lot of hard work especially in the arms and the shoulders. 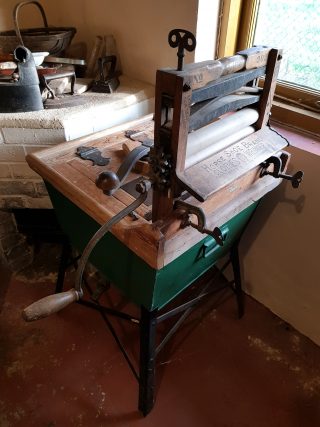 An alternative to the dolly was this 1920s ‘Darling’ washing machine which needed the operator to continuously crank a handle. This moved a paddle inside the tub which, in turn, moved the laundry backwards and forwards in the water. 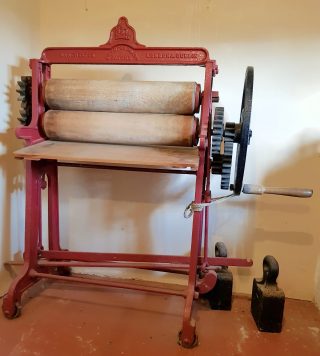 Mangles were originally used to wring water from wet laundry, later they were used to press or flatten large items such as bed linen. This mangle is a heavy piece of cast iron equipment with a handle that turns two wooden rollers. Wet items were fed through the rollers which squeezed out the water into a bucket underneath. It required two people to work it – one to hold the laundry and another to turn the handle. 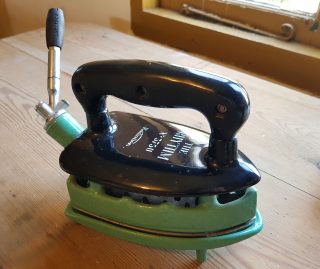 Simple flat irons for smoothing out the wrinkles in clothes were still used into the 1900s. They were heated before use by a fire or on a stove. Many households had at least two irons which they could use in rotation: one in use, and one re-heating. An alternative to this was the ‘charcoal iron’ which was filled with heated hot coals or charcoal. These were more efficient for retaining heat but gave out fumes. By the 1940s gas irons were available which delivered a more consistent heat source (pictured). The tube at the back of the iron was attached to the gas supply and controlled by turning the tap. Once lit, jets inside the iron would heat the metal plate.

Cleaning the laundry was a lengthy, potentially dangerous, and labour-intensive task in the early twentieth century. Farmworkers’ clothes would have needed soaking overnight and a thorough wash to get them clean. Furthermore, many families would have taken in extra washing to supplement their income.2

Still think that doing your washing is a chore?