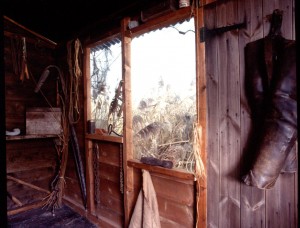 Before the 1930s, a few people made a living from what they could shoot and catch. Others would go out in their spare time and whatever they caught would provide extra food for the family.

We have created this shed to show you the equipment and environment of a fen wildfowler. You can also see traps for small animals, as well as birds and fish. Catching rats, mice and moles would be something familiar to many village people.

Josh Scott and Ernie James were still earning a living from wildfowling in the 1960s.Today shooting and fishing are only seen as leisure pursuits. Large-scale fen drainage schemes have left none of the original marshland. Nearby Wicken Fen (nature reserve) is maintained by the National Trust as one of the last surviving areas of fen.