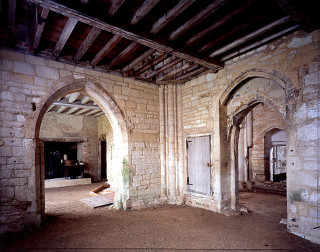 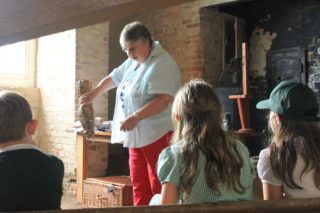 In Medieval times, there was a common belief that illnesses such as Ague (malaria) and the Black Death Plague were caused by the smells in the air, so people carried small pouches of aromatic herbs that they could hold to their nose when they encountered a really bad smell. The rich carried theirs in pomanders, small gold or silver boxes that could be ball shaped or square.

Many would have grown herbs in their garden but the people of the Fens in those days lived in a wet, boggy land where it might be difficult to grow them.

Fortunately, in the Fens there was Denny Abbey where there had been a religious community for over 300 years. Perhaps the nuns at Denny Abbey would have helped those who came to the gates when they were sick. They would have been able to add more exotic spices not available to the poorer people.

Many herbs grown at Denny Abbey were also used to drive away pests such as fleas, flies, rats, bed bugs and clothes moths. As we now know that malaria is carried by mosquitoes (there would have been lots of these in the Fens) and the Plague by infected fleas (and everyone had fleas) they would probably have helped a little.

Make your own Pest Control Scented Pouch or Pomander

Using plants you may have in your garden or dried herbs from the kitchen cupboard (not ground ones as they will seep through the fabric).

Below are some suggested herbs to use:

For the pouch, cut a piece of thin cotton or muslin into a circle about 20cm diameter (or you could use an organza bag).


Tip your herb mixture onto the centre of the cloth circle then gather it up into a pouch and tie the neck with string. Hang it in your wardrobe of put in a drawer.

You could also use any small box you have and decorate it with sparkly stickers or jewels to make an ornate pomander.


Don’t forget to share your finished pomanders with us!