All Objects Great and Small

The Farmland Museum is home to a wide variety of objects that reflect farming and rural life in Cambridgeshire. Take a closer look at some of the smallest and one of the largest items in our collections. 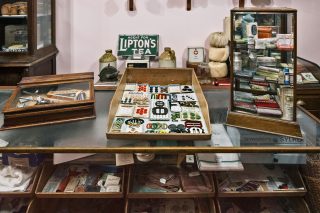 Buttons and buckles on display in the Village Shop

In the mid-twentieth century, most women would have made their own clothes. Picking up a card of buttons from a village shop would have allowed the amateur dressmaker to complete their creations. 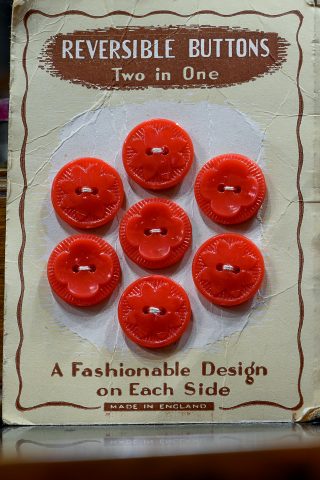 Carded set of red buttons from the Village Shop display. Each button measures no more than one inch in diameter

These red round buttons have an incised decoration. On one side there is an eight-pointed flower, on the other a four-leaved flower. The manufacturer claims that these designs are not only ‘fashionable’ but that their reversibility also offers ‘two in one’ value. The shortage of textiles for civilian clothing during the Second World War (1939 –1945) and the government’s ‘make do and mend’ message encouraged people to refresh old garments. Replacing the buttons would be one relatively quick and affordable way of achieving this. Buttons could also be recycled and were frequently stored at home in a tin for re-use. 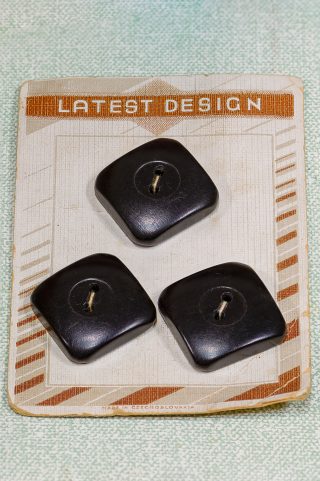 The backing card for these three square black buttons assures the buyer that they are of the ‘latest design’. Whilst many women in rural areas did not have access to city boutiques and department stores, they could create new styles of dress at home. Sewing was part of a girl’s elementary education, newspapers carried advertisements for paper patterns, and magazines would sometimes include a free pattern. 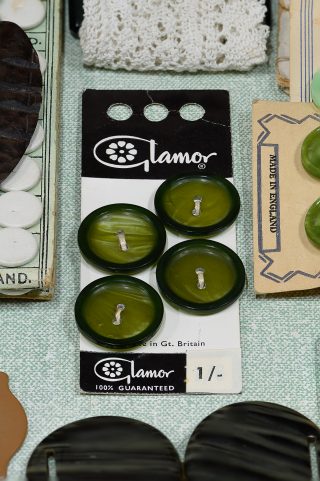 This set of four round green buttons labelled ‘Glamor’ were manufactured by Welsh Products Limited in Glamorgan. The company made a range of buttons in different, colours, designs, and materials. Former female employees report that they were paid by the gross for sewing the buttons onto the backing cards.1 Priced at one shilling, these small pieces of decorative history open a window onto the lives and material world of women in the mid-twentieth century.

Turning now to one of the largest items in the Farmland Museum’s collections, the McCormick International Harvester Farmall M tractor. 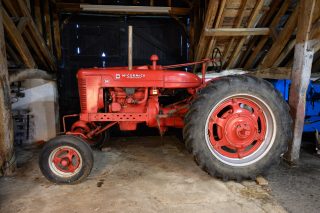 American International Harvester Corporation (IH) was one of the largest and most successful producers of tractors. It opened factories in Liverpool, Doncaster, and Bradford to assemble tractors for the British market.

One reason for the company’s success was its early standardisation of power take-off which connects the tractor’s engine to other attached machines including ploughs and seed drills. This gave IH a lead on its competitors who were slower to use this technology.

The decal (label) on our tractor shows IH’s trademark which was designed by Raymond Loewy in the late 1930s.2 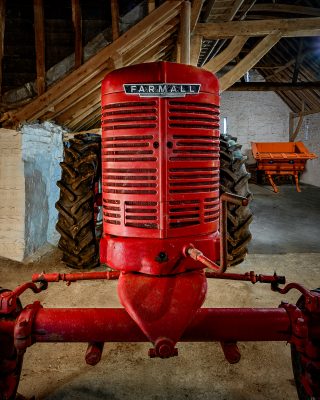 The streamlined, rounded radiator grille shell and horizontal barred grille were also styled by Loewy and were to become considered a design classic.

IH changed its traditional grey paint scheme in 1936 to red. This bright colour made the tractors more visible to other motorists as they became increasingly used on public roads. The effect of the high specifications and design made the tractor popular with buyers and, more recently, with visitors to the museum.